If you live in a part of the US where ticks are few and far between, count your blessings! Here in the NorthEast, they are a miserable part of outdoor life - carrying diseases like Lyme, Anaplasmosis and Ehrlichia, all which can cause devastating illness in people and pets. Rocky Mountain Spotted Fever and Tularemia are other nasties transmitted by ticks elsewhere in the country. 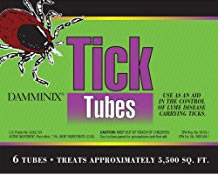 Aside from an occasional dog tick, our particular corner of New Jersey had always been relatively tick-free. But with increasing development and construction, wildlife habitats have shifted. We were appalled last Spring to start finding little nymph ticks on everything!

We didn't want to spray and wanted to use something proven effective - given the severity of the diseases they carry, we didn't want to experiment. A friend told us about tick tubes and we decided to give them a try.

What are Tick Tubes?

Manufactured by EcoHealth Inc., Damminix Tick Tubes® are biodegradeable, heavy cardboard tubes filled with permethrin-treated cotton balls. They are EPA approved, environmentally friendly, and never expire. More importantly, studies have shown that Tick Tubes reduce the risk of exposure to an infected tick by up to 97% on a treated property.

How do Tick Tubes work?

Contrary to popular belief, it's mice, not deer, that are the primary hosts for ticks. Studies have shown that while deer and other animals pick them up indirectly while passing through the rodents' habitat, mice and their nests are the primary breeding ground for ticks.

Tick tubes don't kill the ticks directly. They work by enticing mice and other small rodents to use the cotton for nesting material. The mice take pieces of the treated cotton back to their nests, where the permethrin binds with the oils in their fur. This makes the mice into little walking tick killers - when the ticks climb onto the mice to feed, the permethrin kills the ticks, breaking the insect's life-cycle.

This process is entirely harmless to the mice, and there is no pesticide residue on your plants or lawn like you would have if you used a spray. 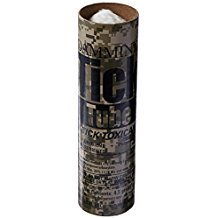 To use them, place the tick tubes around the areas of your property frequented by rodents, such as hedges, woodpiles, along walls, or just off the edges of lawns and flower beds. There are instructions in the box which will give you ideas of some recommended placements.

Placement is somewhat trial-and-error. Check the tubes occasionally the first week or two to see if the cotton has been disturbed. If it is still untouched after a couple of weeks, try placing that tube in a different place. We had one tube we tried in 3 different locations before we found any takers. Others tubes did their job quickly, as the cotton filling was noticeably picked apart and removed. The most popular location here turned out to be a semi-enclosed area along our foundation, underneath the stairs leading to our deck - who knew?

A word to the wise: Make a notes of where you put them so you can find them again to check. Tubes are camouflaged to blend in with your yard. This works very well - you can literally walk right by one and never see it.

After the initial invasion of ticks we were sure we'd have problems later on in the year. Not so - within a month of putting down the tick tubes, we didn't see another tick the entire season. Not one!

We were pretty impressed. Ticks are hard to kill and don't disappear on their own. Did the Damminix Tick Tubes do their job? We believe they did, and will be investing in another round this year..

The manufacturer recommends putting the tubes out in April, when nymphs from the previous season are active, and again sometime between July and September - to catch any new larvae that hatch. Nymphs are the most likely tick stage to transmit disease, so getting the tubes in place early is highly recommended!

Even if you have a small yard, consider buying a larger box. They never expire, so check prices - buying more may be more cost-effective in the long run.

If you have trouble finding the Damminix brand, the Thermacell product sold under the name "Thermacell Tick Control Tubes" is basically the same item and works just as well!


Have you used Tick Tubes? We'd love to hear your story. Catch us on our Facebook page or on Twitter and let us know!