The bestselling Katchy Original Indoor Insect Trap is an indoor mosquito trap that uses a combination of UV light, a fan, and a glue card to catch and kill small flying insects.

This simple trap uses no chemical attractants, and is, per the manufacturer, "safe for the entire family'. The Katchy has a sleek and attractive design. Just place it on any tabletop or flat surface - it can be powered by either USB or an A/C outlet. Available in black or white. 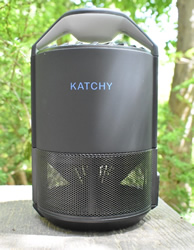 In the spring of 2020, the Katchy Original Insect Trap, a mid to low priced import insect catcher, quickly became a top-selling and top-rated indoor insect trap on Amazon. Of course, we had to check it out!

Simple in both design and concept, the Katchy comes pre-assembled and stands 9" high. This cylindrical trap is 5.5" in diameter and relatively good looking. as mosquito traps go. Catch methods are a traditional combination found in similar traps - an ultraviolet light source to attract insects, a fan to suck them into the trap, and a glue card in the bottom of the trap to keep them there until they die.

There is no legal warranty that we could find, but the manufacturer states in the instructions that "if you don't notice a difference" after setting up your trap, "just contact us within a year for a prompt full refund."

What's in the box? 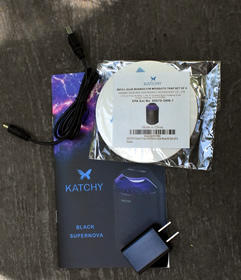 The trap seems at first glance to be well made with a sleek, eye-pleasing design. The ultraviolet light is an unobtrusive blue glow when in use. It is housed in the top of the unit, which doubles as a handle. There is no bulb to replace. The fan is underneath the light, facing up towards it. There are buttons on the top to select either "Standard" or "Low" power mode. The fan is quieter and the light is dimmer on "Low." 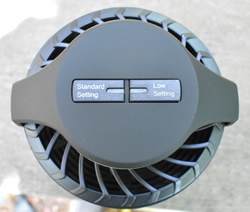 The power cable plugs into the side of the unit. It can be plugged directly into a USB port, or plugged into an A/C outlet using the included USB to A/C adapter plug. 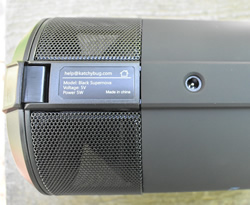 To open the catch container, press the latch button on the side opposite the power connector and pull the base of the trap gently to open it. 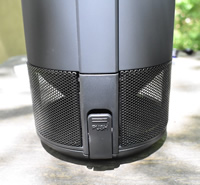 Base of the trap with the catch compartment opened. The round glue card is placed in the bottom door of the compartment.

How do you use the Katchy?

The Katchy couldn't be simpler to use. Put a glue card in the base of the trap (peel off the protective paper covering the adhesive first), plug it in, and choose either the Standard or Low fan setting.

The manufacturer recommends placing the trap close to where the insects are - near a fruit bowl, near the trash - and running it for several hours in a dark room. According to the documentation, you will see results after about 3 days.

Can you use the Katchy outdoors?

No - the Katchy is not waterproof and is for indoor use only. Avoid using it in rooms with high humidity, like the bathroom or laundry room.

How do you clean the Katchy?

To clean and replace the glue card:

Check frequently and change the glue card before it gets too full.

Also, heads up - it's possible to have a couple of live insects in the compartment that haven't gotten stuck to the glue card. Look before you open it

Does the Katchy work?

It seems to do a fair job of catching tiny insects (ours caught a few gnats in our overnight test.)

We're a little dubious about how effectively it will attract mosquitoes. Mosquitoes tend to fly in a straight line towards their prey. Bugs need to fly into the small space near and under the light on the Katchy to be pulled in by the fan, which leaves a lot of potential escape area. The light isn't overly bright and there are no other attractants, like heat or carbon dioxide to lure them in.

How is Katchy vs DynaTrap?

DynaTrap makes two different types of indoor traps: Ones that use the same technology as their outdoor traps, and ones that use light and a glue card. The Katchy is most similar in function and price to the Dynatrap Flylight in the latter group.

The DynaTrap Flylight traps plug directly into a wall outlet. There is no fan but the light is brighter and the adhesive on the StickyTech glue cards is stronger. Insects fly in through fairly large openings in front of the light on the sides and are caught directly on the card. One advantage to this: There are no live insects in the trap when you change the card. The bulb is replaceable and the trap can be left running 24/7.

The Katchy is a tabletop unit that plugs into an A/C outlet or USB port. It pulls insects down into the trap via a fan, from a somewhat smaller area on top of the trap and between the fan and the light source. Insects are pulled to a container at the bottom of the trap where they eventually come in contact with the glue card. The bulb is built in and cannot be replaced. The Katchy is not intended for 24/7 use.

The Katchy is an affordable indoor insect trap in an attractive and easy-to-use package. The catch methods are similar to a lot of other low to mid-priced traps and we're not convinced that the implementation is very effective. Especially since the manufacturer recommends putting the trap NEAR the insects and running it at night - under those conditions a few unlucky bugs are sure to stumble into any trop!. We did catch a couple of gnats (literally - a couple), running it overnight in the basement. Unfortunatly (or fortunately) the weather has been cool here and we don't have our usual volume of mosquitoes for more robust testing..

There is also no formal warranty provided, however the manufacturer promises to provide a full refund if it does not produce results. Their customer service appears to be responsive, based on a handful of online reports from people who received a defective unit.

Dimensions: 9" high x 5.5" diameter
Weight: 1.45 lbs.
Power Source: A/C or USB. Cord and adapterprovided.
Coverage: 320 sq ft. For indoor use only
Warranty: No formal warranty, but the manufacturer states that you can contact them "within a year" for a "prompt full refund" if you don't see results.