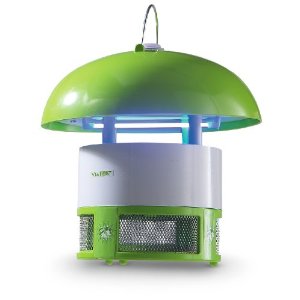 The Viatek Mini was the first mosquito trap to break the $50 price barrier. That in itself was enough to get our attention.

The Mini is completely maintenance-free. It has built-in LED lights and doesn't rely on propane, pesticides, or chemical lures, so there are no supplies to purchase. It uses a combination of light, heat and CO2 to attract insects - essentially the same capture technology used by the highly-rated Dynatrap.

With prices this low there are bound to be some tradeoffs - for the Viatek Mini the tradeoffs come in the form of a plastic housing and a skimpy power cord. There are also shortcomings in the design, which we cover in more detail in our review (along with some tips which may help you get more out of this bargain-priced trap.)

If you're looking to fend off a large, hungry mosquito population, we suggest you look into a more powerful and durable all-weather unit. However if you have a small deck or patio a and want to see if a mosquito trap is right for you with a minimal investment, the Viatek Mini is worth a look!

The budget-friendly Viatek Mini mosquito trap boasts of the same basic technology (light, fan and titanium dioxide coating to generate carbon dioxide) as traps costing up to 5 times as much. Is this inexpensive gadget as good as the original Dynatrap? Or is it more a case of getting what you pay for? We took a close-up look and later put it to the test. 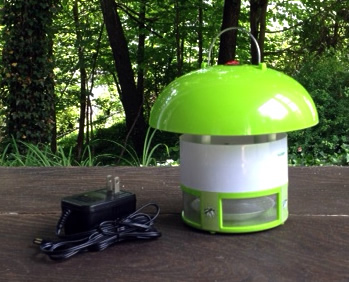 Out of the box, the Viatek Mini is an attractive device with a cheery, light-green top. Construction is ordinary plastic, and it has a metal handle which can be used for hanging or carrying. The trap has maintenance-free, blue-spectrum LED bulbs built into the underside of the top, and uses a fan (like the one which cools the inside of your PC) to draw insects into a cleanable plastic and metal-screened trap area. A titanium dioxide coating generates CO2 to attract mosquitoes. It comes with a power adapter and 6' cord.

Setup of the Viatek Mini is a no-brainer.

And that's it! Cleaning also couldn't be easier. Simply unplug the unit, twist the capture bin off, clean it and twist it back in place, and you're good to go. Other than emptying the bin, this trap is maintenance free - no bulbs to burn out, no costly supplies.

This device is quiet, cool to the touch, and the light from the blue-ish LED's is pleasant and not annoyingly bright.

The Mini TRIES to keep up with the "big kids" - really, it does. However there are a few things lacking.

First, be aware that this light, plastic trap is not intended to be kept out in the elements 24x7. The manufacturer notes that it is "weather resistant", but also cautions that the plug must be covered. It's suitable for a deck or covered porch, not your yard.

Speaking of the plug, a 6' cord on an outdoor insect trap is a joke, as is the thin wire it is made of. Unless you are using this on your patio with an outlet nearby, you definitely need an extension cord. BTW, our test unit was almost pulled off the table by the combined weight of the adapter and our extension cord, so be careful where and how you set it up. Hanging it up somewhere would be our choice.

The catch bin comes with a little "saucer" which sits in it. We're not sure why - maybe the insects are supposed to politely die on the saucer making it easier to empty? (FYI, they don't.)

The blue spectrum LED's should intrigue most species of mosquito 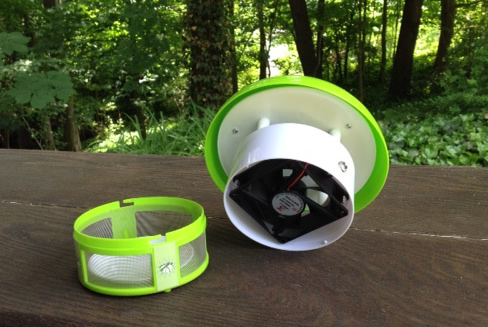 To find out how effective it was, we put the Viatek Mini to the test - a 12 hour test running from 11AM to 11PM. Here's what we got: 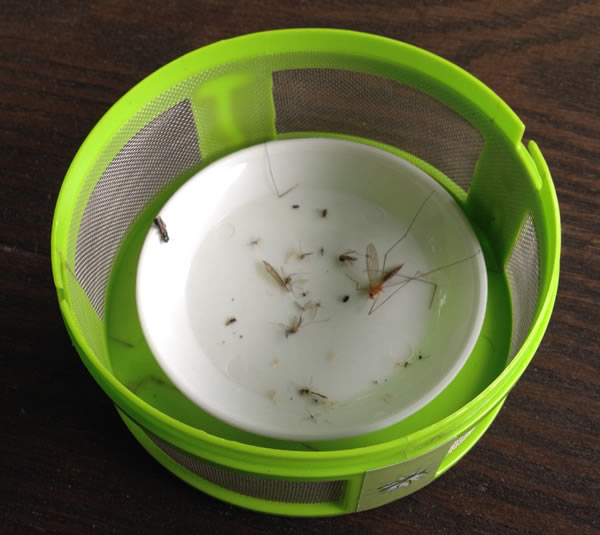 As you can see, the Mini did catch some mosquitoes - we counted 9 or 10 - but nothing near the impressive haul from the Dynatrap under simalar test conditions. The rest of the catch was a few "no see-ums" and other miscellaneous insects. Interestingly, we did not catch any moths.

We can only speculate as to why the Viatek turned in a smaller catch:

So is the Viatek Mini as good as the more-expensive Dynatrap?

In a word, no. It's a flimsier product, lacking the sturdy, all-weather construction of the Dynatrap. And while our test showed that it did catch some mosquitoes, the overall capture rates were just a fraction of what we got from the Dynatrap. 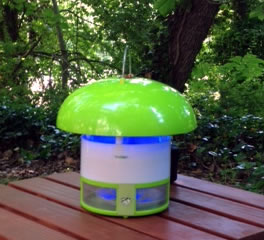 Still, we think it could come in handy in some situations.

It's just not the right tool for a large area or a heavy duty mosquito problem.

If you don't find yourself catching much in this trap, you might want to try one of the following "hacks" to make it more attractive to the bloodsucking critters:

Note that attaching things to the trap will void your warranty. Try these at your own risk, and please use common sense, like keeping flammable things away from heat, liquids away from electricity and everything away from moving fan blades.

This same trap is available from Shopladder.com under the Bob Vila brand.