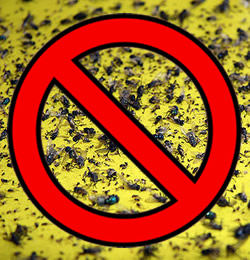 Fly paper, insect glue boards and the like are reliable pest control solutions which have been around for years. They have no chemicals or poisons and are safe around humans. However, these devices should never be used outdoors. They pose a serious hazard to beneficial wildlife, especially birds.

Birds, reptiles and even some larger insects are nature's form of pest control. Many songbird species, including wrens, bluebirds, cardinals, chickadees, blackbirds and robins, are insectivorous - they eat insects and feed them to their young.

Drawn to the bugs which are caught on the sticky paper of a trap, they fly in expecting a feast only to get stuck on the trap themselves. According to wildlife rehabilitators, this happens very often and is almost always fatal to the bird, which will exhaust itself and die trying to escape. Even if they manage to get away, they will probably be injured and fall victim to predators.

Other wildlife at risk includes reptiles, such as frogs and lizards, which dine on insects. These traps also catch harmless insects like butterflies and dragonflies (which are voracious mosquito eaters themselves). Glue boards set out to capture mice can kill owls and other rodent-eating species. 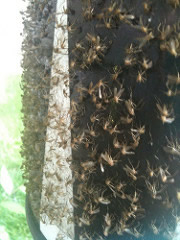 The popular SkeeterVac line of mosquito traps optionally uses glue paper to help capture insects. Called "TacTrap", this is a piece of sticky black and white paper which wraps around the body of the trap. Besides being unattractive to look at and downright nasty to change when covered with dead bugs (see photo), there are many reports of birds getting caught on it and killed.

We love the SkeeterVacs in general - they are effective and reliable mosquito traps - but we don't love this feature and don't recommend it. As with the popular machines from Mosquito Magnet, Mega Catch and Dynatrap, the SkeeterVac works just fine without the TacTrap paper.

If you're a diehard fan of TacTrap, here are some suggestions for minimizing the wildlife dangers: